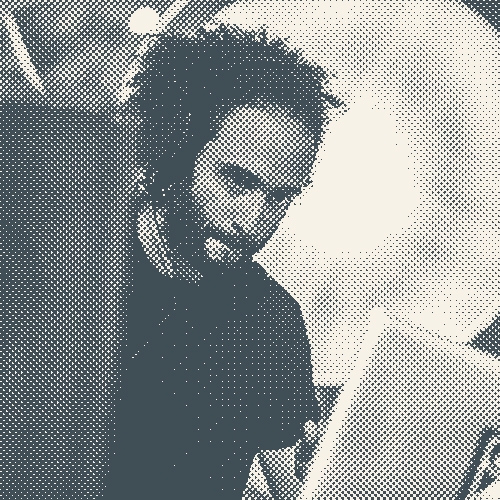 Anthoni Logos, real name Daniel Schotsborg, is an Amsterdam based producer and live act, and is graduated with a master of music at the Conservatorium of Amsterdam and Universi-ty of the Arts Utrecht. He has years of experience in music; he’s playing the bass and toured Europe and Turkey in the afrofunk-jazz band ‘Koffie’, composing soundscapes for interactive installations, making music for a broad range of projects – from modern dance to meditation, to international commercials. He focuses on the cutting edge of new tech-nology and experiential music.

Playing as himself or as part of the electronic live band End of Time at clubs and festivals such as Wildeburg Festival (NL), Garbicz Festival (Poland), WEF Davos (Switserland), Ams-terdam Dance Event, Studio 80 (Amsterdam), Claire (Amsterdam), WAREHOUSE (Rotter-dam), Magneet Festival (Amsterdam) and many more. Anthoni Logos is driven by deep bass lines and grooving percussive hats. He loves to use the contrast of the drum computer with more loosely played or sound designed organic percussive elements, preferably Moog-ish or Modular synth sounds, embellished with warm organic melodies. Combining the ‘real’ and ‘the abstract’ to shape his own world of sound – mysterious, futuristic, grooving, melodic and story driven, somewhere in between the vague borders of house and techno music.

It’s his journey into sound, to explore what’s more possible, instead of only composing mu-sic. A journey which uses electronic music and culture to awaken the people to put them in contact with their true being. He believes that there is an underlying order in this uni-verse. This order expresses itself in the form of numerical relations and these numerical relations are the unifying principle of his music. In nature and the universe these mathe-matics and geometry are the unifying principles of life. We are so separate from that reali-ty now – in life and in music, Anthoni Logos wants to connect them again. He does this by using controllers such as the Linnstrument and detuning his analog synths to these tuning scales or by using natural sounds and the natural voice. Either way he’s convinced that he tunes his listeners more in alignment with nature and the universe.

Anthoni Logos also worked on a Mphil/PhD (Master of Philosophy and Doctor of Philosophy) at Bournemouth University in England, to study the effects of sound on the human brain with EEG technology (method to record electrical activity of the brain along the scalp). He’s now transforming this research into an interactive brain/sound system where sound is used to positively influence the listeners’ brain